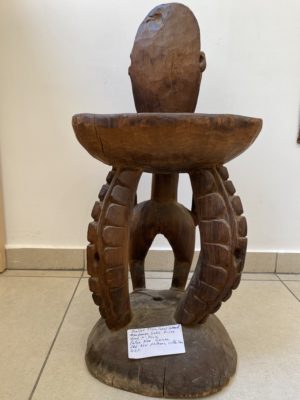 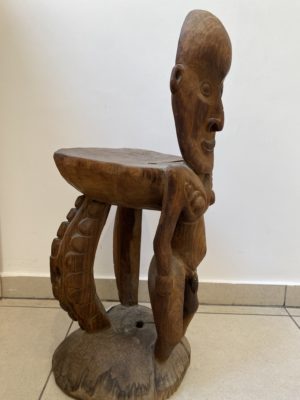 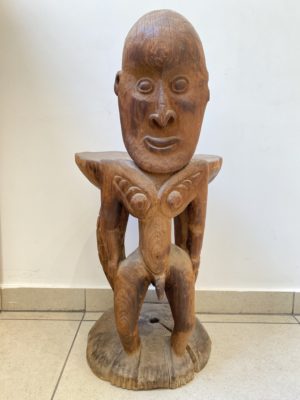 This object was made by a member of the Iatmul [YAHT-mool] cultural group from the Middle Sepik region of Papua New Guinea (part of Melanesia). The religious life of the Sepik River was dominated by men’s societies, and wood carving of this kind was done exclusively by men. The artist who created this Orator’s Stool began by cutting the shape out of a large piece of wood ochre.

This sculpture would have been kept inside a special house called a Men’s House, where Iatmul ceremonial activities often take place.

Every Iatmul community has its own ceremonial chair, similar to this one. This Orator’s Stool (also called a “speaking chair”) is not meant to be sat upon, but is used during village meetings, debates, and tribal ceremonies. During a discussion, the speaker stands next to the orator’s stool and hits the top of the stool with a cluster of leaves, sticks, and grass to validate important points in his argument. He also places leaves on the chair to confirm his statements. When the first speaker is finished and all the leaves lay on the chair, the next speaker can begin his address. After all of the speakers have stated their arguments, the village chief hits the chair a few more times and states a decision for all to follow.

The human figure is a common form in Sepik River art. As seen in this sculpture, figures were often given an elongated head and torso and short limbs. Special emphasis was placed on the head to show that it is the most important part of the body, where the spirit resides. The incised patterns on the chest and arms represent scarification patterns that would be seen on many Iatmul men. Scarification is part of a young man’s initiation into the men’s secret society and the scars are considered marks of beauty and status.